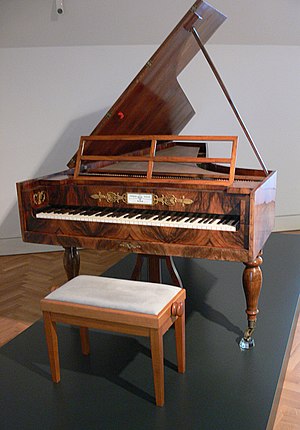 Starting as a cabinet maker, Graf became a student to a piano maker Jakob Schelkle in 1800. After the death of his teacher, Graf married his widow and took over the workshop.[2] In 1826 he converted a former dance hall in Vienna into a piano factory.[2] Graf's factory produced more than 3000 pianos. Graf sold the firm to Carl Stein (a grandson of Johann Andreas Stein) in 1824.

In 1826 Graf gave an instrument to Ludwig van Beethoven. After the composer's death Graf took the piano back and sold it to the Weimer family in Vienna.[3] Now this instrument is displayed in the Beethoven-Haus in Bonn. Another composer that was using Graf's pianos was Frédéric Chopin. He chose it for a concert in Vienna and continued to "cherish" Graf's instruments after that.[4] Clara and Robert Schumann received a piano from Graf as a wedding gift.[5] After Schumann's death in 1856, Clara gave the piano to Johannes Brahms, who used it until 1873.[6] Felix Mendelssohn also admired Graf's instruments. He purchased one in 1832 and later ordered another one for using it in Dusseldorf.[7] Franz Liszt, Camille Pleyel and Friedrich Kalkbrenner also used pianos from Conrad Graf. In September 2018 a replica of a Graf's instrument built by Paul McNulty was used in the first International Chopin Piano Competition (run by Fryderyk Chopin Institute).[8]