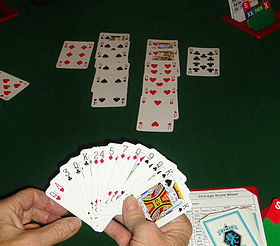 Declarer, near camera, plays dummy's hand as well as his own

Contract bridge, or simply bridge, is a trick-taking card game which is played by two pairs of players, one pair against the other pair.[1] Partners sit opposite each other around a table.[2]

Millions of people play bridge worldwide in clubs, tournaments, online and with friends at home. It is one of the world's most popular card games.[3] The World Bridge Federation is the governing body for international competitive bridge.

It is played with the standard 52 cards in four suits. The game developed out of whist, which is a relatively old card game. Whist is played with the trump suit chosen by chance, whereas in bridge it is chosen by a process called "bidding". A trump is a card which can beat any card from the other three suits.

In whist, the winners had to get most of the tricks (a trick is a round of four cards), that is, seven or more tricks. However, in bridge the players bid in sequence to decide what the "contract" shall be. The contract is decided by the last bid, and will be in one of the four suits, or in "no trumps", without a trump suit.

The set-up for playing the cards is also different from whist. The side which wins the bidding sequence plays with only one partner ("declarer") controlling both hands. His or her partner is called "dummy", and that hand is played face up on the table so all players can see it.

The scoring system for bridge is very much more complicated than it is for whist. Fundamentally, it depends on whether or not declarer makes his contract or not. If he does not, the defending side collect penalty points. If he does make the contract his side wins points. How many points are won or lost depends on the scoring table (not shown here).

Example of a bidding sequence

In the example on the right, West was the dealer and first to bid. The bidding goes as shown with South becoming the declarer in a 4 spades contract, he being the first to bid spades. East-West become the defenders and West becomes the opening leader, North becomes the dummy and spades the trump suit.

Ten tricks are required by North-South, six tricks plus the 4-level bid.