An aerial view of Costa Mesa in March 2011 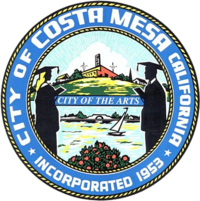 Costa Mesa is a city in Orange County, California. This place became a city in 1953. It was a farming community of 16,840. It has become a suburban and edge city with an economy based on retail, commerce, and light manufacturing. The population was 109,960 at the 2010 United States Census.

Costa Mesa has a semi-arid climate (Köppen climate classification BSh) with warm temperatures year round. Rain falls mostly in the winter. There is almost no rain during the summer. Morning low clouds and fog are common because it is by the coast.

Template:California cities and mayors of 100,000 population