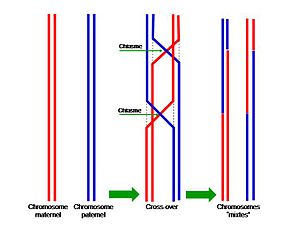 Crossing over is a basic concept of genetics and cell biology, often called recombination. It occurs during meiosis.

Crossing over involves the exchange of chromosome segments between non-sister chromatids during the production of gametes. The effect is to assort (shuffle) the alleles on parental chromosomes, so that the gametes carry combinations of genes different from either parent. This has the overall effect of increasing the variety of phenotypes present in a population.

By suitable means, the process can be observed directly in stained cells, and indirectly by the presence or absence of genetic markers on the chromosomes. The visible crossovers are called chiasma (plural: chiasmata), which is Greek for a cross. F.A. Janssens was the first to suggest what chiasmata meant.[1][2]

The large-scale effect of crossing over is to spread variation through a population. This is the main consequence of sexual reproduction compared to non-sexual modes of reproduction.

The main advantage to the parents is the greater variety in their offspring. This, it is thought, increases the likelihood that some of the offspring will survive and reproduce. This has been the subject of much investigation and discussion.[3]