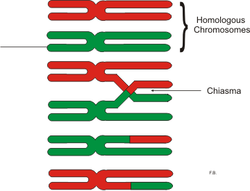 Crossing over takes place between the chromatids of homologous chromosomes

Meiosis is a special type of cell division. Unlike mitosis, the way normal body cells divide, meiosis results in cells that only have half the usual number of chromosomes, one from each pair. For that reason, meiosis is often called reduction division. In the long run, meiosis increases genetic variation, in a way which will be explained later. Gametes are haploid; they have only half the number of chromosomes as a normal body cell (called a somatic cell). Fertilization restores the chromosomes in body cells to the diploid number.

The basic number of chromosomes in the body cells of a species is called the somatic number and is designated 2n. In humans 2n = 46; we have 46 chromosomes. In the sex cells the chromosome number is n (humans: n = 23).[1] So, in normal diploid organisms, chromosomes are present in two copies, one from each parent (23x2=46). The only exception are the sex chomosomes. In mammals, the female has two X chromosomes, and the male one X and one Y chromosome.

A karyotype is the characteristic chromosome number of a eukaryote species.[1][2][3] The preparation and study of karyotypes is part of cytogenetics, the genetics of cells.

All eukaryotes that reproduce sexually use meiosis. This also includes many single-celled organisms. Meiosis does not occur in archaea or bacteria, which reproduce via asexual processes such as binary fission.

Meiosis as part of sexual reproduction

The significance of fertilization

The significance of meiosis

The two chromosomes in a pair are not identical because at any particular locus[4] on the chromosomes there may be different alleles (forms of the gene) on the two chromosomes. Think about each pair of chromosomes, one set from each parent. From each pair, only one goes into each gamete. So, in the first place, gametes differ because of each pair the gamete may have the father's chromosome or the mother's. This is called 'independent assortment'.

2. To allow crossing-over to take place between each pair of parental chromosomes. Crossing-over changes which alleles sit on a particular chromosome.[5]

So, though described as 'mother's' and 'father's' chromosomes, in practice the gamete chromosomes are not all the same as the parents' chromosomes. This is because bits of chromosomes have been exchanged in the process of meiosis.

Although the gametes have only one set of chromosomes, that set is a shuffled mixture of genetic material from both parents.

As with shuffling a deck of cards, many different combinations of genes can be produced without a change (mutation) in any individual gene. However, mutations do occur, and they may add alleles which were not in the population before. At any rate, the shuffling increases the variety of the offspring, and the variety gives at least some of the offspring a better chance of surviving in difficult times. The shuffling of alleles which takes place in meiosis may be the reason why sexual reproduction exists at all.[6]

"It is not difficult to think of reasons why sexual populations should have long-term advantages over asexual ones. They can evolve more rapidly to meet changing circumstances..." [7]

Several quite large taxa (groups of organisms) use cyclical parthenogenesis. This is when several generations are born by virgin birth, and then a generation occurs with normal sexual reproduction. Examples include aphids, and cladocerans (small crustacea called water fleas). Aphids usually operate as follows: when the weather is good, and their plant hosts are at their best, they use parthenogenesis. At the end of the season, when the weather gets worse, they use sexual reproduction. This system of reproduction is called apogamy.

In parthenogenesis, the eggs contain only the mother's genetic material, and they are not fertilized. The egg cells may be produced either by meiosis or mitosis. When meiosis occurs, crossing-over produces a genetic fingerprint which differs somewhat from the mother's. So, the parthenogenetic greenfly offspring are not identical, and do show some genetic variation: some chromosome segments differ because of meiosis. Mitosis would produce identical offspring.[8]

Amongst these parthenogenetic taxa are a number of species which have entirely abandoned sex. These include the Bdelloid rotifers, which only reproduce by parthenogenesis.

Meiosis can be divided into Meiosis I and Meiosis II.

The function of the first division is to permit crossing over. Just like Mitosis, meiosis includes Prophase, Metaphase, Anaphase and Telophase.

Prophase I: The chromosomes become visible, the nuclear envelope disappears and the centrioles (at the top and bottom of the nucleus) begin forming spindle fibres that envelop the chromosomes.

At this stage each chromosome is split into two sister chromatids, held together by the centromeres. The paired chromosomes now have four chromatids (2 sets of 'sisters') pressed together. Crossing over takes place between two of the non-sister chromatids; the other two remain uncrossed. The crossover results in the exchange of segments of each of the participating chromatids, DNA and associated chromatin protein. Genetically, the process is called recombination. 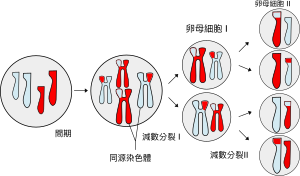 Metaphase I: The chromosomes line up along the equatorial (the central line) of the spindle fibres in homologous pairs.

(Cytokinesis, the division of cells into two, takes place. The cell divides.)

Telophase I: The two daughter cells are completely divided, a nucleic envelope forms and the chromosomes become less visible. There are 23 chromosomes in each of these cells.

The two cells prepare to divide again in a stage known as Interkinesis or Interphase II. Both of these cells will go through meiosis II.

Metaphase II: The chromosomes line up along the middle line on the spindle fibres

Anaphase II: The chromosomes get split into its two chromatids. Chromatids are the two strands of DNA (deoxyribo-nucleic acid) that make up the chromosome. They are joined by a mid-way connection called a centromere.

Telophase II: The cells are completely divided. The nucleic envelope reforms and four new cells with different DNA are created. In females, only one becomes a mature egg, while the remaining three become re-absorbed into the body.

In humans, there are certain conditions that are caused by a meiosis gone wrong. Examples are: