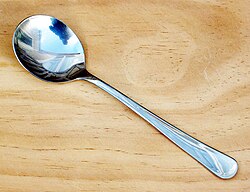 Cutlery refers to tools used for preparing, serving and eating food. The most common types of cutlery are knives, spoons and forks. Other words for cutlery are silverware, tableware, utensils and flatware.

The best quality cutlery may be made of silver, but more often of silver plate. Stainless steel is used for most good quality household cutlery. Pewter was often used in the past for cheap cutlery. Nickel silver, sometimes called German silver, is another alloy, with copper, nickel, and zinc in it. Plastic cutlery is used for eating fast food, because it is very cheap, and is be thrown away afterwards.

Serving practice and use of cutlery varies somewhat between cultures. Formal dinners have cutlery set out in a traditional manner. There will be two sets of knives and forks, an outer smaller set for the first course and a larger inner set for the main course. Cutlery for later courses will usually be delivered with those courses. In an informal restaurant, cutlery may come wrapped in a cloth napkin (serviette).

Chinese and Japanese food is eaten with chopsticks, and food pre-cut to a size suitable for that method. Some other oriental cuisines are eaten the fork and spoon, with no knife.