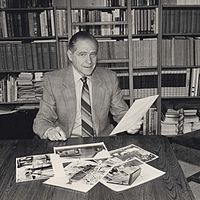 Cyril Edel Leonoff (February 22, 1925 – April 17, 2016) was a Canadian civil engineer, historian and author. He was the founding president of the Jewish Historical Society of British Columbia.[1] He was born in Winnipeg, Manitoba.