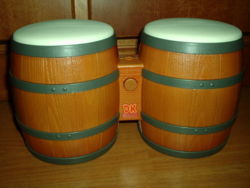 The DK Bongos are seen in various games from the Super Smash Bros. series. They are a part of Donkey Kong's "Final Smash" attack (a powerful attack that can be used to kill opponents easily).