DSL (for Digital Subscriber Loop or Digital Subscriber Line) is the base for a number of technologies used to transmit digital data over a telephone line. Telephone lines only transmit a limited spectrum of signals (roughly 20 Hertz to 20,000 Hertz, for voice). This means that the other frequencies can be used to transmit data. The data is multiplexed onto the telephone line. At both ends, a device called Splitter (or DSL filter) separates the data part and the telephony part. DSL provides the physical layer, the lowest layer of the OSI Model. ATM or Ethernet is used as data link layer, IP at the network layer.

Most DSL lines of consumers are asymmetric. This is called ADSL and means it has a higher bit rate in one direction than in the other. 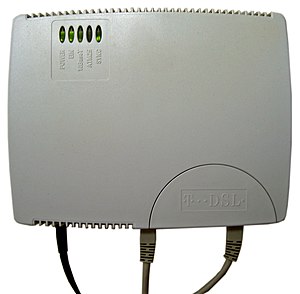 DSL (or VDSL, Very highspeed Digital Subscriber Line) typically works by dividing the frequencies used in a single phone line into two primary "bands". The ISP data is carried over the high-frequency band (25 kHz and above) while the voice is carried over the lower-frequency band (4 kHz and below). The user typically installs a DSL filter on each phone. This removes the high frequencies from the phone line, so that the phone only sends or receives the lower frequencies (the human voice). The DSL modem and the normal telephone equipment can be used on the line at the same time without interference from each other.

The customer end of the connection consists of a Terminal Adaptor (a DSL modem). This converts data from the digital signals used by computers into a voltage signal of a suitable frequency range which is then applied to the phone line.

In some DSL variations (for example, HDSL), the terminal adapter is directly connected to the computer via a serial interface, using communication protocols such as RS-232 or V.35. In other cases (particularly ADSL), it is common for the customer equipment to be integrated with other functions, such as routing, firewalling, or other application-specific hardware and software. In this case, the entire equipment is usually referred to as a DSL router or DSL gateway.