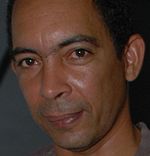 He organized protests at the UNESCO headquarters in Havana and published about poverty in Cuba. He was arrested and went on a hunger strike.[3] Ferrer was facing up to 8 years in prison.[4] He was released on 22 June 2010.[5]