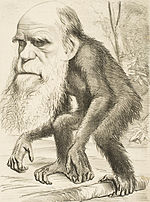 As "Darwinism" became widely accepted in the 1870s, cariacatures of Charles Darwin with an ape or monkey body symbolised evolution.[1]

Darwinism is a term used to talk about ideas connected to those Charles Darwin had about evolution.[2] The meaning of 'Darwinism' has changed over time, and depends on who uses the term.[3]

The term was coined by Thomas Henry Huxley in April 1860.[4] He used it to describe evolutionary concepts, including similar ideas such as Malthusianism and Spencerism. In the late 19th century it came to mean the concept that natural selection was the only mechanism of evolution, in contrast to Lamarckism. Around 1900, Gregor Mendel's work was rediscovered. Today, Darwin and Mendel's ideas have been brought together. The term 'Darwinism' has become associated with the modern evolutionary synthesis.[3]