Depeche Mode is an English band. It formed in Basildon, Essex in 1980. The band's name was taken from French fashion magazine, Dépêche mode, which means "fashion update" or "fashion news dispatch". Depeche Mode became famous in the 1980s. The band has sold over 100 million records around the world.

Depeche Mode were inducted into the Rock and Roll Hall of Fame in 2020. 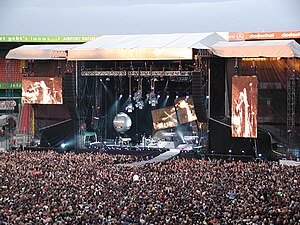