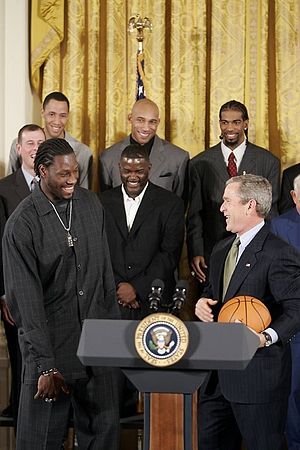 The Pistons are congratulated by President George W. Bush after capturing the 2004 title.

The Detroit Pistons are a team of the National Basketball Association. While billed as a Detroit team, its home arena has been The Palace of Auburn Hills, located in the northern suburb of Auburn Hills, Michigan, from 1988 from 2018. The Pistons will move to the city of Detroit for the 2017–18 season, sharing the new Little Caesars Arena with the Detroit Red Wings of the NHL. In 1948, the team was in Fort Wayne, Indiana, but that was before moving to Detroit in 1957. The team has won NBA championships in 1989, 1990, and 2004. Their head coach is John Kuester, they are owned by Tom Gores and their general manager is Joe Dumars.