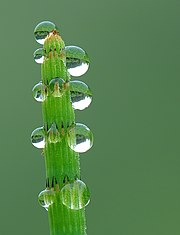 Some dew drops on a leaf.

Dew is a thin film of water that has condensed on the surface of objects near the ground in the morning or evening.[1] These objects cool in the night. When they cool, the thin layer of air around them cools too. This makes some water vapor condense on the object.[1] The condensation happens because the air is able to hold less water when it is cooled. The temperature when condensation begins is called the dew point. If the dew point temperature becomes lower than 32 °F (0 °C), the dew turns into frost. Most people agree that the water in the dew comes from the atmosphere.[1] However, some studies suggest that it also comes up through the soil and then condenses on the ground.[1] This happens, though, only when conditions are right.

Dew forms best when the atmosphere is clean, the air is calm, and there is not much wind.[2] It does not always form in the night and outdoors, though. They also work when eyeglasses get steamy in warm, wet rooms. Dew may also happen in industrial processes. However, people use the word condensation more often than dew.

In the Old Testament dew is used as a symbol. Deuteronomy 32:3 says: "...my speech shall distill as the dew, as the small rain upon the tender herb, and as the showers upon the grass." (Deuteronomy 32 3)