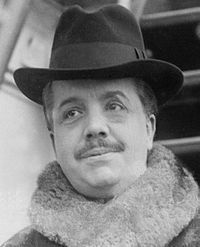 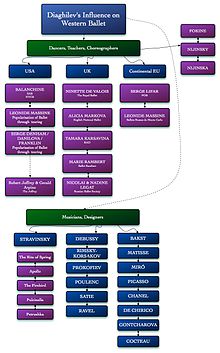 Diaghilev's collaborators, and his influence on western dance.

"Its success was so extraordinary, its ballets so revolutionary, and its artists so electrifying that its appearance in Paris before the First World War sparked an international ballet boom".[1]p47

For twenty years, between 1909 and 1929, they were the most famous ballet company in the world. Many of their ideas influenced art and music as well as dance. Diaghilev got some of the world's greatest painters to design sets for his productions, and some great composers, including Igor Stravinsky, to compose music for the ballets.

Diaghilev's gift lay in spotting talent, and bringing great artists to work together. He also persuaded patrons to support the Ballets Russes. The production costs were enormous, and were not always covered by the ticket prices. The repertoire (list) of new ballets and new music grew, and the productions were not always successful. Diaghilev's company folded soon after his death, though many of the group worked together in new companies.[2]

Diaghilev was homosexual.[3] He died of diabetes.