Donald A. B. Lindberg 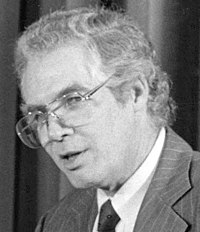 Donald Allen Bror Lindberg[1] (September 21, 1933 – August 17, 2019) was an American mathematician. He was born in New York City. He was the Director of the United States National Library of Medicine from 1984 until his retirement in 2015.[2] He was known for his work in medical computing.[3]