Drosera, sometimes called Sundews, are carnivorous plants. They use a thick gluey goo called mucilage to trap and digest their prey.The mucilage is attached to special hairs called trichomes. They are one of the most common carnivorous plants. They have at least 188 species.[1] They are found everywhere in the world except Antarctica.[2] Many sundews species usually live for two or more years. Others live for only one year and reproduce by seed. Some sundew species can live for 50 years.[3]

Its scientific name is from the Greek δρόσος: "drosos" = "dew, dewdrops". Its English name is sundew, from Latin ros solis, meaning "dew of the sun". Both names describe the sweet-smelling, sticky mucilage (goo) that comes down the ends of tentacles on each flower stalk.[2] This mucilage rolls down the plant, attracting sugar-loving insects day and night.[2] The mucilage has enzymes which digests them so that the plants can get the nitrogen it needs from it. Like all plants, the sundew makes its own food, and just uses insects for nitrogen and other nutrients. These tiny flowering plants are about 5 in (127 mm) tall,[2] about as tall as an adult's hand, though some climbing sundews can be much taller. One species of sundew, the Drosera erythrogyne, grew up to 30 ft (9 m).[4] Sundew roots are not very strong. They are usually simply for taking in water and keeping the sundew firmly planted to the ground. 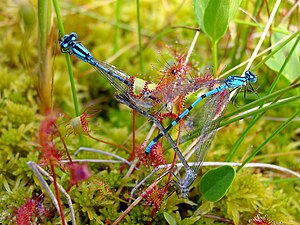 A fly, butterfly, or other nectar-loving insect will find the sweet smell of the mucilage that oozes from the plant. Landing on the colorful tip, the insect will immediately be stuck.[2] The plant has cells that make more mucilage in the place where the insect is. The gooey mucilage will completely surround the insect. Then, the sundew plant wraps its outside tentacles around the insect, absorbing its nutrients. It curls its tentacles around the insect quite quickly: in some species this takes only a few seconds. Some species, like Drosera glanduligera can curl its tentacles towards its prey in less than a second.[5] Many sundews can bend parts of themselves so that the prey will be as sticky as possible. One species, Drosera capensis, actually wraps its leaf around the prey in 30 minutes, as seen in the picture on the right. The prey usually dies in about 15 minutes.[6] The sundew will then eat the entire insect except the outside exoskeleton. When the plant has finished eating, it opens up its tentacles and drops the exoskeleton to the ground.[2]

Sundews have also been used in herbal medicine for a long time. Today they are still used to stop coughs, asthma, and lung infections.

Because they are carnivorous (eat living things), and because of the beauty of the dew-like mucilage on their tentacles, sundews are also popular as ornamental plants. However, they can be quite hard to grow: they need lots of water (their soil usually has to keep on being very wet), and this water has to be pure (without minerals inside it), because this can stop them from growing or even kill them.

Parts of sundews were also eaten by Australian Aborigines.[7]