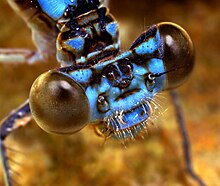 Head of a damselfly. Notice the eyes: they are widely separated.

Damselflies are insects in the order Odonata. Damselflies are similar to dragonflies, but in a separate suborder, the Zygoptera. There are 20 families of damselfly.

The wings of most damselflies are held along, and parallel to, the body when at rest. There are also damselfly families in which the wings are held open, as in the true dragonflies (Anisoptera).

Damselflies are also usually smaller, weaker fliers than dragonflies, and their eyes are well separated, by more than their own diameter. Another distinction is that their forewings and hindwings look similar; this is not the case in the true dragonflies. Like dragonflies, damselflies cannot walk, but only land. Their life cycle is also similar. They have incomplete metamorphosis, with an aquatic nymph which is carnivorous, as is the adult.

They are often brilliantly coloured, but when they land on a bush, out of direct sunlight, they are not easy to see. They land and close their wings at the same instant. They have eyes which detect movement well, and they fly off if anything moves nearby. Thus, although they are fragile and highly coloured, they are not easily caught by predators.