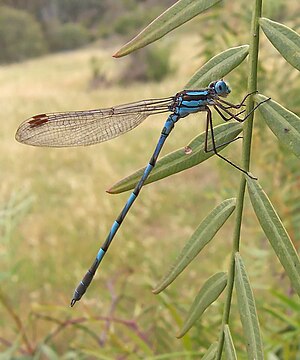 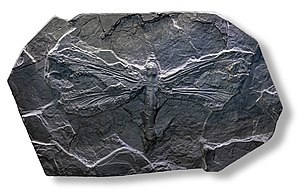 The giant Upper Carboniferous dragonfly ancestor, Meganeura monyi, had a wingspan of about 680 mm (27 in).[1] Museum of Toulouse

The Odonata are an order of flying insects, the dragonflies and damselflies.

Like most of the flying insects (flies, beetles, Lepidoptera and Hymenoptera), they evolved in the early Mesozoic era.[2] Their prototypes, the giant dragonflies of the Carboniferous, 325 mya, are no longer put in the Odonata. These are now called Protodonata or Meganisoptera.

The two suborders are easily distinguished:

All Odonata have aquatic larvae called 'nymphs', and all of them, larvae and adults, are carnivorous. The adults can land, but rarely walk. Their legs are specialised for catching prey. They are almost entirely insectivorous.

These insects characteristically have large rounded heads covered mostly by big compound eyes, legs that catch prey (other insects) in flight, two pairs of long, transparent wings that move independently, and long abdomens. They have two ocelli (eye spots) and short antennae. The mouthparts are on the underside of the head and include simple chewing mandibles in the adult.[3]