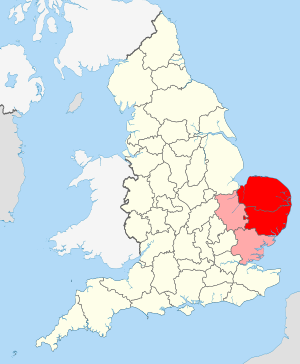 Norfolk and Suffolk, the core area of East Anglia. Both Peterborough and Cambridgeshire are to the west, while Essex is to the south.

East Anglia is a region of eastern England, named after one of the ancient Anglo-Saxon kingdoms, which was named after the homeland of the Angles, Angeln in northern Germany. The kingdom consisted of Norfolk and Suffolk ("North folk" and "South folk") but the region's borders are vague.

Farming and gardening are very successful in this fertile country. The landscape has been heavily influenced by Dutch technology.