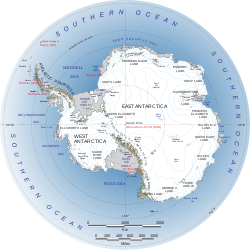 East Antarctica, also called Greater Antarctica, is the largest part (two-thirds) of the Antarctic continent.[1] It is on the Indian Ocean side of the Transantarctic Mountains. It is the coldest, windiest, and driest part of Earth.[1] East Antarctica holds the record as the coldest place on earth.[2]