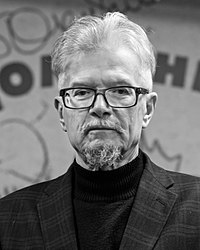 He was a critic of Vladimir Putin. Limonov was one of the leaders of The Other Russia political bloc.[1] However, following the 2014 pro-Russian unrest in Ukraine, he has expressed some support for Putin.[2][3][4]