Elementary algebra is the most basic form of algebra taught to students. It is often one of the next areas of mathematics taught to students after arithmetic. While in arithmetic only numbers and operators like +, −, ×, and ÷ occur; in algebra, variables (like a, x, y) are used to stand for numbers. This is useful because:

These three are the main strands of elementary algebra. Elementary algebra is often used in many other subjects, like science, business, and building. Abstract algebra, a much more advanced topic, is generally taught late in college.

If an equation has only one number that is unknown it is sometimes easy to solve. The unknown number is called "x":

Dividing both sides by 2:

It may help to think of this equation as a see-saw or balance, what you do to one side, you must do to the other and your main aim is to get x by itself. 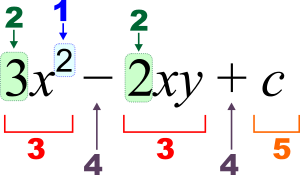