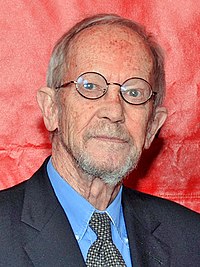 His best-known works are Get Shorty, Out of Sight, Hombre, Mr. Majestyk, and Rum Punch. He was also writing for the TV series Justified.[1]

Leonard was born on October 11, 1925 in New Orleans, Louisiana.[1] He was raised in Detroit, Michigan. Leonard studied at the University of Detroit.[1]

Leonard spent the last years of his life with his family in Oakland County, Michigan. He suffered a stroke on July 29, 2013. Reports stated that Leonard was recovering from the stroke.[2]