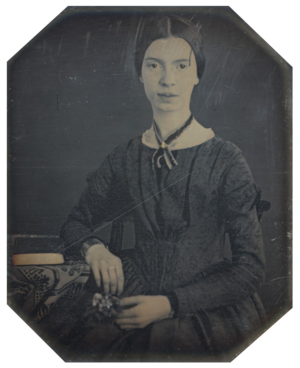 Emily Dickinson (December 10, 1830 - May 15, 1886) was an American poet who also wrote short stories. She is famous for writing many poems. Researchers know of almost 1,800 poems that she has written to this day. However, she published only a few of them while she was living. Other people changed her unpublished poems before the world could read them. She was born in Amherst, Massachusetts and died of nephritis there. People describe her poems as lyrical and unique. Sources say that she may have grown wild flowers for medicinal purposes and used them to show her mood in her poems.Today, many think Emily Dickinson's poetry has had a big effect on poetry.

Researchers know little about Dickinson’s life. Most of what they know about her is from people who knew her and may not all be true. Her family had a good amount of money and had many friends. She had a brother and a sister.[1] She had a normal life when she was a child. When she became an adult, she spent more and more time alone and started wearing only white. Only after she died all of her poems were published. Until 1955, editors changed them to a style of writing that was popular at the time. Now, most of her poems have been published and can be found at a local library.

Her teachers saw her talent for writing. But she did not win any literary awards during her lifetime. Some didn't like her work because of its different use of grammar. In her late twenties, she chose to stay with her family for most of her time.

Her father was a United States Senator. Edward Dickinson was a lawyer from the Whig party. Emily's family did not get along with each other. She described her mother as cold and unloving. Some researchers said that her father didn't support female scholars. Dickinson never married. She did have strong relationships with several men as friends, confidantes, and mentors. She also enjoyed an close relationship with her friend and sister-in law.[2]

End of her life

She was sick with some health problems, like depression and anxiety disorders. Later in her life, she began to suffer from pain in her eyes and sensitivity to light. She died at the age of 55 from a stroke. She was buried in the West Cemetery, in Amherst, MA.