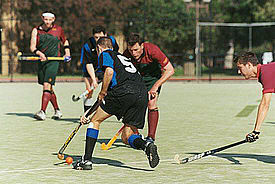 A game of field hockey.

Field Hockey is a well-liked sport for both men and women. It is played in many countries all around the world.

The game is played between two teams and each team is made up of 11 players, and in 35-minute halves with 15 minutes break at halftime.

Field hockey is played with a ball on natural grass, or on sand-based or water based artificial turfs with a small hard ball.

The hockey stick that is used is a J shape and made out of wood, glass and fibre. The stick has a curve hook at the end.

The positions are similar to the game soccer; in which they have fullbacks, halfbacks and forwards. Each team has a selected person who plays the goalkeeper. The goalkeepers try and stop the opposition team from scoring goals.