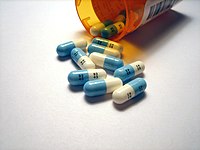 Fluoxetine hydrochloride is an antidepressant medication. It is used as a drug against various illnesses, like depression, obsessive-compulsive disorder, Panic disorder, and other illnesses. Fluoxetine is a one of a group of antidepressants called selective serotonin reuptake inhibitors (SSRIs). It is commonly known as Prozac.

There are newer drugs available to treat these conditions. Nevertheless, it remains very popular. Over 23.1 million prescriptions for fluoxetine were filled in the United States in 2006. This makes it the third most prescribed antidepressant.[1]

This short article about medicine can be made longer. You can help Wikipedia by adding to it.
he:SSRI#תרופות ממשפחת SSRI