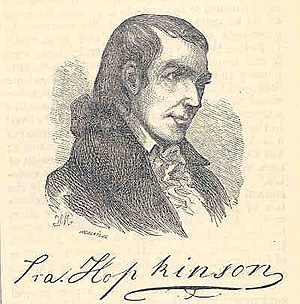 Francis Hopkinson. Image from The Cyclopaedia of American Literature (1880).

Francis Hopkinson (September 21, 1737 – May 9, 1791), an American author, was one of the signers of the Declaration of Independence as a delegate from New Jersey. His supporters believe he played a part in the design of the first American flag.

Great Seal of the United States