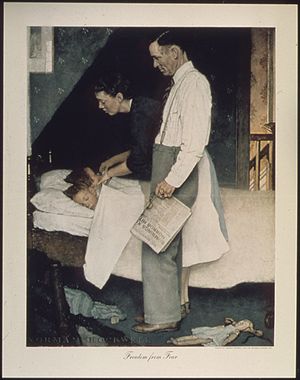 Freedom from Fear of painter Norman Rockwell of 1943

This right, as well as the other three of the Four Freedoms of Roosevelt, makes part of the Universal Declaration of Human Rights, which was accepted by the General Assembly of the United Nations on December 10, 1948.[2] Freedom from fear is written down in the introduction tot the UN Declaration.[3]

In his speech Roosevelt described his fourth right as follows:

The fourth is freedom from fear which, translated into world terms, means a world-wide reduction of armaments to such a point and in such a thorough fashion that no nation will be in a position to commit an act of physical aggression against any neighbor, anywhere in the world.
—Franklin D. Roosevelt, January 6, 1941[1]

In 1943 Norman Rockwell painted his work Freedom from Fear which is one of four paintings he made on Roosevelts Four Freedoms.