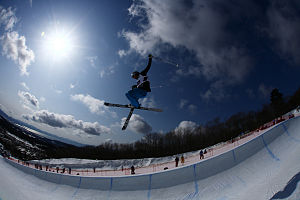 The 2009 Freestyle World Championship in Fukushima, Japan.
Freestyle skiing is an acrobatic form of skiing which is divided into a number of different disciplines.[1] Freestyle skiing first began to be taken seriously in the 1960s and early 1970s. However, some people thought that this style of skiing was too dangerous and did not want it to be an Olympic sport. The free-form sport had few rules and was not without danger; knee injuries became a common case for professional freestylers.[2]

The International Ski Federation (FIS) recognized freestyle as a sport in 1979 and brought in new regulations regarding certification of athletes and jump techniques in an effort to curb the dangerous elements of the competitions. The first World Cup series was staged in 1980 and the first FIS Freestyle World Ski Championship took place in 1986 in Tignes, France.

Help Improve This Page: Please contact us to become an approved KidzSearch editor and provide your credentials. Provide feedback on this article in our Freestyle skiing Forum