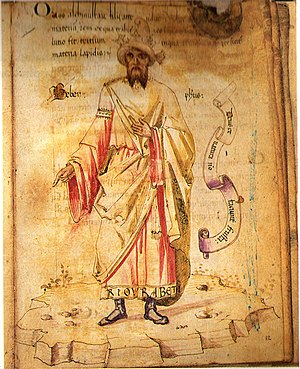 Geber, 721-815
Abu Musa Jabir ibn Hayyan (Arabic: جابر بن حيان) (c. 721–c. 815), known also by his Latinised name Geber, was a Persian[1][2][3][4][5][6][7][8][9][10][11][12][13] prominent chemist, alchemist, pharmacist, philosopher, astronomer/astrologer, physician and physicist. He has also been widely referred to as the "father of chemistry". Ibn Hayyan is widely credited with the introduction of the experimental method into alchemy, and with the invention of numerous important processes still used in modern chemistry today, such as the syntheses of hydrochloric and nitric acids, distillation, and crystallisation. His original works are highly esoteric and probably coded, though nobody today knows what the code is. On the surface, his alchemical career revolved around an elaborate chemical numerology based on consonants in the Arabic names of substances and the concept of takwin, the artificial creation of life in the alchemical laboratory.