The human skull is often used as a symbol for death

Death is the end of life in an organism. All biological functions of the living thing stop, including the mind and the senses. The usual signal for death is that the heart stops beating and cannot be restarted. This can be caused by many things. All living things have a limited lifespan, and all living things eventually die.

Living things which have died are normally described as being dead. Death of humans is often investigated for the cause, in case of crime (such as murder) or disease that may continue to kill other humans. About 150,000 people die every day around the world.[1] About two thirds of these people die because of age.[1] In addition to the physical body, some believe humans also have a soul and believe that the soul can continue without a body (afterlife), move into another body (reincarnation), or cease to exist (annihilationism). Religions have different beliefs about this issue. Many cultures have their own customs and rituals to respect the dead.

When people talk about things or events that lead to the death of a plant or animal, those things or events are usually described as being deadly, or fatal. In the case of diseases, they are described as terminal. Humans are no different from any other lifeform. Our bodies have an ability for self-repair, but that ability is limited. Finding the cause of death is a medical speciality called pathology. In medicine, death is when the heart stops beating for more than several minutes. There are special times in which people recover even though the heart has stopped for 30 minutes, such as near-drowning in very cold water. If machines are used to help the heart and lungs work, then the moment of death is more difficult to know. 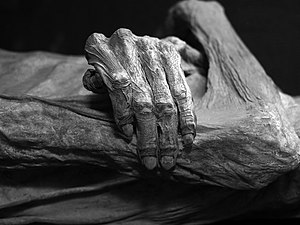 Dead bodies can be mummified either naturally or by intention.

In any society, human death is surrounded by ritual - a wake or funeral is normal. In some places it was common to eat the dead in a form of ritual cannibalism. But this is no longer common, in part because disease like kuru can be passed this way. Human dead bodies are taboo in most societies and must be handled in special ways - for a combination of religious and hygiene reasons. A human dead body must always be reported in law, to be sure it is disposed of properly.

Dealing with dead bodies and their property

Finding the cause of any human death and stopping a similar death from happening to someone else are the main reasons people look into human morbidity or let dead bodies be cut open and looked at in an autopsy. Some religions do not allow autopsies, because they feel the body is holy. Autopsies are usually required by the state if someone dies and people do not know why. The autopsy helps find out if someone killed the person on purpose, tried to hurt them, or if they died from a sickness.

To prepare for their own death, humans can write a last will and testament to be clear about who gets their property. A person will sometimes also volunteer to be an organ donor. This might mean giving the whole body to medical research. It can also save the lives of others by making organ transplants possible.

For a long time, many people have been afraid of death and a lot of people have wondered about what may happen to people after they die. This is one of the largest questions of philosophy and religion. Many people believe there is some form of afterlife.

Ancient rulers sometimes did insist not only that their own bodies, and much property, but even their servants and relatives be destroyed at their funeral. In India this ritual still does sometimes occur. Old women sometimes carry guns in case their husband's relatives come to throw them on the funeral fire.

Christianity has a special focus on death because of the state killing of Jesus Christ by the Romans. In Islam this is thought to demonstrate the injustice of human systems of dealing out death, and the ability of the best people to overcome it and even forgive it[source?]. In Christianity itself it is thought to prove that Jesus himself was really God and so could lose his body and still have the power of resurrection.[2] In Buddhism reincarnation is believed to occur. Reincarnation is an idea taken from Hinduism.

Confucianism advises respect for parents and forms of ancestor worship to respect both dead and living ancestors.

Every ethical tradition including the medical view of the body has some ritual surrounding death. Often these excuse behaviours that might be hated if they did not have the ritual. For instance, one may say that organ transplant is like cannibalism.

Very much of what happens at a human death is ritual. People who wish theirs to be dealt with a certain way, and who wish a particular treatment like cremation of their body, should decide in advance and set up the necessary payments and agreements. This makes it much easier for their family after they die, since there is no longer the ability to clearly communicate the wish.

For the same reason, saying goodbye is important. Most of the stress of death seems to come for loved ones who "did not have a chance to say goodbye".

Maybe it is to relieve this stress that rituals are created, and to bring together those that knew someone so that the personal experience a person can no longer communicate for themselves, can be exchanged by others.

Some ritual, such as seances, claim to allow people to speak to the dead. This is not claimed to be very reliable, both by scientists and even by those who do them very often.

Aside from wills, goodbyes, organ donations and funerals, there is important personal experience to decide to pass on, or not, when someone knows they may soon die. Palliative care focuses on basic decisions people make when they are very close to the end of their lives, and it ensures someone is always available to talk to them. It is a replacement for heroic medical intervention that may keep them physically alive but with no quality of life. Human psychology must prepare for death if it is anything other than a quick surprise:

Elizabeth Kubler-Ross wrote that there were several stages in dying, of which denial was the first, and acceptance was the last. Recording one's life is often something people with acceptance will do to leave a memoir or a full autobiography:

Because events leave living memory, and may only be part of oral tradition, there are projects to record everything that people remember about World War I and the Shoah. The first of these was to record everything remembered about the U.S. Civil War. This discipline has changed history since we have so many more first person accounts of the times, and made social history much more standard.