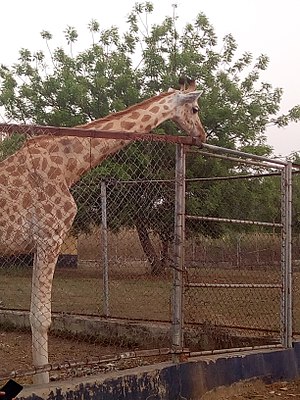 Giraffe in a zoo
Lua error in package.lua at line 80: module 'Module:Taxonbar/exists' not found.

A giraffe (Giraffa camelopardalis) is a mammal which lives in Africa. Giraffes have an even number of toes and are the tallest land animals. Giraffes and Okapi are the family Giraffidae.

Their fur has a light yellowish tan or off-white colour with brown or russet patches. No two giraffes have the same pattern. The different sub-species have different coat patterns. Both male and female giraffes have small horn-like stumps on their head, which are covered with skin. The horns are called ossicones. These come from the cartilage displaced from their skull as it develops. These are fur-covered bumps on their skulls, unlike the horns of other animals.

Giraffes are found in parts of Africa. They live on the savannah, which is the African grassland, or in light woodland. They do not live in thick forests where it is difficult to see predators, such as lions, approaching.The temperature is normally around 70 degrees. Most giraffes live either in East Africa or in Angola and Zambia in southwestern Africa.

Giraffes eat mostly leaves from tall trees, which they can reach because of their long legs and long necks, as well as fruit. Their rough tongue allows them to eat the acacia leaves protected by thorns. They can go without water for weeks. Like all mammals, giraffes have only seven bones in their necks.

Giraffes live alone or in loose groups. Young male giraffes foa single baby, which is called "calf". Giraffes give birth while standing, so the baby falls down 2 metres. Giraffe calfs are already 2 m tall and weigh 50-55 kg.[1][2] The calf stays with its mother for 1½ years. Young giraffes become mature when they are 4 years old, and they are fully grown when they are 6 years old. Giraffes can live to 25 years old, and in captivity they can live 35 years.