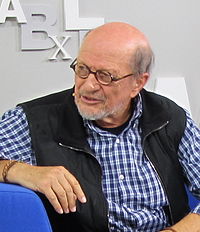 Guillermo Mordillo (4 August 1932 – 30 June 2019), known simply as Mordillo, was an Argentine cartoonist and animator. He was born in Buenos Aires. Mordillo was one of the most widely published cartoonists of the 1970s.[1] He was known for creating greeting cards for Hallmark Cards.

From 1976 to 1981, Mordillo's cartoons were used by Slovenian artist Miki Muster to create Mordillo, a series of 400 short animations (300 min) that were later presented at Cannes and bought by television studios from 30 countries.[2][3]