Haines City is a city in Polk County, Florida, United States. As of 2007, the Economic and Business Research at the University of Florida estimated that the city's population was 18,748.[1] Thus making it the third largest city by population in the county.[1] 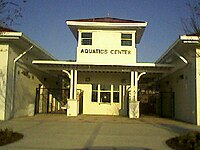 The new Aquatics Center in the park scheduled to open around July 3rd.

The city went without a public park as both Lake Eva Park and Railroad Park were both undergoing some sort renovations. From July 2008 through July 2009.

The city has many schools in the area, including Haines City High School.