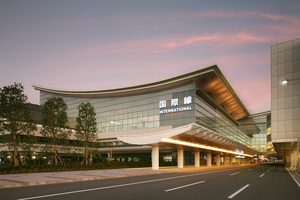 Tokyo International Airport (東京国際空港, Tōkyō Kokusai Kūkō?) (IATA: HND, ICAO: RJTT), usually called Haneda Airport (羽田空港, Haneda Kūkō?) is an airport in Tokyo, Japan.[1] It is one of the two main airports in the Greater Tokyo Area. Two of Japan's major airlines, Japan Airlines and All Nippon Airways, are based in Haneda Airport. Other Japanese airlines are also based in Haneda. Haneda was the main international airport in Tokyo up to 1978. After that, most domestic flights to and from Tokyo stayed at Haneda, and most international flights moved to Narita International Airport.

The airport is in Ōta, Tokyo, 14 km (8.7 mi) south of Tokyo Station. Access to the airport by train starts at Hamamatsucho Station or at Shinagawa Station.