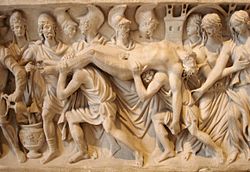 Hector brought back to Troy, from a Roman sarcophagus of c. 180–200 AD

Hector (Greek: Ἕκτωρ, Hektōr) was a Trojan prince and one of the central figures of the Iliad. The first-born son of King Priam and Queen Hecuba, Hector was the heir apparent to the throne and the greatest of Troy's warriors in the defense of the city. Hector fought against a various number of the Greeks through the course of the Trojan War, including Protesilaus and Ajax. He was married to Andromache, with whom he had a son, Astyanax, whom the Trojans called Scamandrios.

Hector is eventually killed by Achilles (Book XXII of The Iliad).