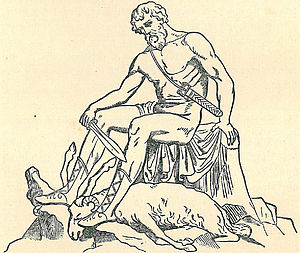 Ajax the Great or Aias (ancient Greek: Αἴας) son of Telamon,[1] was a well-known hero from the Trojan War. He was the cousin of Achilles. Ajax died by committing suicide. This happened after Achilles died and he was in a contest with Odysseus to see who would receive Achilles's armour: he lost.[1]