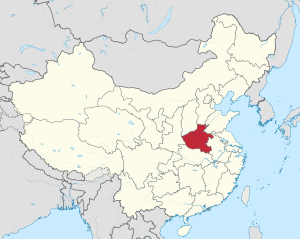 Henan is a province of the People's Republic of China. It is in the central eastern part of China.[1] The name Henan means "south of the Yellow River." The capital of Henan is Zhengzhou.[1]

The abbreviation of Henan is Yu (豫) to remember a kingdom from history yhat was in the area, and also because another province also has "He" (河) in its name, Hebei (河北).