Hermes and the Infant Dionysos 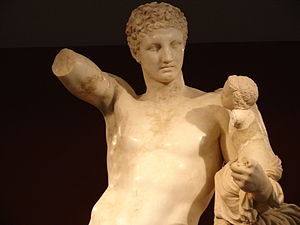 Detail of the statue

Hermes and the Infant Dionysos is a statue possibly made by the ancient Greek sculptor Praxiteles. The statue was discovered in 1877 in the ruins of the Temple of Hera at Olympia, Greece. It is now in the Archaeological Museum of Olympia. The statue was probably made in the 4th century BC. This date is based on a remark by the 2nd century Greek traveller Pausanias.

Hermes stands 2.15 meters (7 ft. ½ in.) tall. Dionysos is missing his arms (except the right hand on Hermes' shoulder). He is missing the end of his right foot. Much of the tree trunk and the plinth are also lost. However, an ancient base survives, made of a grey limestone block between two blocks of marble.

The group is sculpted from a block of Parian marble. Hermes measures 2.10/2.12 meters, 3.70 m with the base. The right foot of Hermes is integral with a section of the base. The face and torso of Hermes are striking for their highly polished, glowing surface. The back shows the marks of the rasp and chisel. The rest of the sculpture is not completely finished. At the time of its discovery, the hair had some slight traces of cinnabar, a form of mercury sulfate with a red color that may have been a preparation for gilding. Cinnabar tints are seen on the sandal straps of the original foot, with traces of gilding. The sandal also bears the motif of a Heraclean knot.