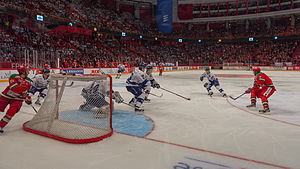 Hockeyallsvenskan game between Leksands IF and Mora IK

Hockeyallsvenskan is the second division for ice hockey in Sweden, where the best teams qualify for Kvalserien, a qualifying competition for the Swedish Hockey League (formerly Elitserien).

Allsvenskan was established in 1983 as an Elitserien pre-qualifying competition, back then starting after Christmas consisting of the autumn season's most successful Divison 1 teams. From the 1999/2000 season, Allsvenskan became played throughout the entire regular seasons, consisting of a northern and a southern group. From the 2005/2006 season, both groups were merged into one.