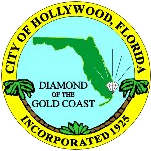 Hollywood is a city in Broward County in Florida in the United States. In 2005 there were 145,629 people living in Hollywood, based on United States Census Bureau figures. Joseph W. Young, Jr. first came to south Florida in 1920 from the state of Washington. He had also lived in California and liked what he had seen of Hollywood, California and the burgeoning movie industry in that state. He dreamed of creating a motion picture industry on the east coast, and founded Hollywood, Florida in 1920.[1]

Young originally named his town "Hollywood by the Sea".

Young's own Mediterranean styled mansion was built in 1921 and still stands at 1055 Hollywood Boulevard, the main thoroughfare from downtown Hollywood to Hollywood Beach. The mansion is on the U.S. National Register of Historic Places.[2]

Hollywood is located on the coastal plain along the Atlantic Ocean in the south-eastern part of the United States, also of Florida. It is bordered by Pembroke Pines, Fort Lauderdale and Hialeah.

In Hollywood, the summers are long, hot, oppressive, wet, and mostly cloudy and the winters are short, comfortable, humid, windy, and mostly clear. Over the course of the year, the temperature typically varies from 61 °F to 89 °F and is rarely below 48 °F or above 92 °F.[3]