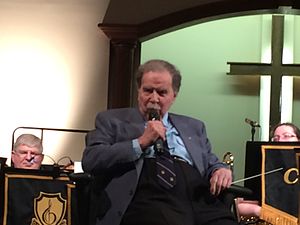 Howard Reid Cable (December 15, 1920 – March 30, 2016) was a Canadian conductor, arranger, music director, composer, and radio and television producer. He was born in Toronto, Ontario. He received an Associate diploma (ATCM) from The Royal Conservatory of Music in Toronto in conducting and bandmastership 1939. Cable composed and arranged the original theme for the Hockey Night in Canada television broadcast, The Saturday Game which opened the broadcast from 1952 until 1968.

Cable died from complications of pneumonia at his home in Toronto, Ontario on March 30, 2016, aged 95.