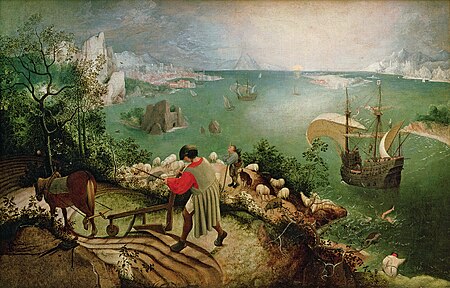 Bruegel's Landscape with the Fall of Icarus (ca. 1558) is a painting which is famous for making the fall to a scarcely noticed event in the background 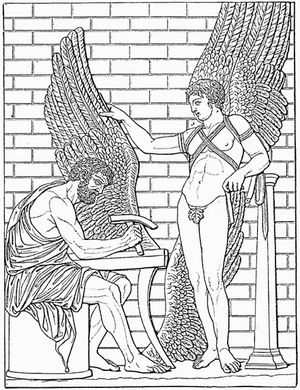 Daedalus and Icarus, a relief in a Roman villa

Icarus was the son of Daedalus. Daedalus was imprisoned in his own invention, the labyrinth. He helped the hero Theseus kill King Minos’s beast, the Minotaur, and run away with King Minos’s daughter, Ariadne.

Daedelus came up with a plan. He knew that Minos controlled all escape routes by land or sea, so he decided to go by air. He built wings for himself and Icarus. They found their way out of the labyrinth and flew out of the highest tower.

Icarus foolishly ignored his father’s advice to fly on the same route as him so that the sun would not melt the wings and the sea would not dampen them. Icarus flew up higher and higher toward the sun, and the wax in the wings melted and he fell into the sea and drowned. Daedalus looked down towards the sea and saw the feathers floating on the water and figured out what happened. Eventually Daedalus found the body and buried it on the island of Icaria, and the sea which Icarus fell into is now called the Icarian Sea.