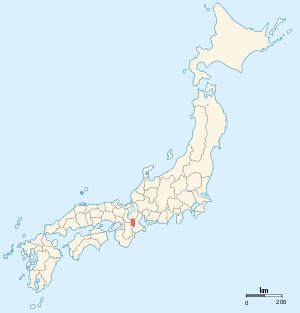 The province had borders with Ise, Ōmi, Yamato, and Yamashiro.

The capital city of the province was Ueno, also called Iga-Ueno.[2]

In the Meiji period, the provinces of Japan were converted into prefectures. The maps of Japan and Iga Province were reformed in the 1870s.[3]

Iga is a small mountain ringed basin (the Ueno basin) in the center of the Kansai region.

Aekuni jinja was the chief Shinto shrine (ichinomiya) of Iga.[4]