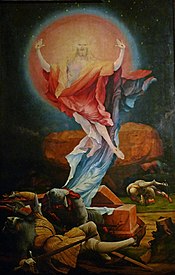 The Incarnation is the Christian belief that Jesus Christ is the God of Israel in a human body. The word incarnate comes from Latin and means “in the flesh” (in=in, carnis=flesh). The incarnation is a basic teaching of Christianity. It is based on the New Testament of the Holy Bible. The incarnation is the belief that Jesus, who is the non-created second person of the triune God; took on a human body and everything that is human and became both man and God. In the Bible its teaching is in the Gospel of John, where in chapter 1 verse 14 (abbreviated as “John 1:14”), it says “And the Word became flesh, and dwelt among us,” [1]

To Clarify, the holy trinity is a made up of 3 divine persons'. The Father God, the Son, Jesus and the Holy spirit. The Holy Spirit is described in many situations, but the most commonly known one is the tongues of fire that rest upon Jesus' 12 disciples' heads and it empowers them to speak different languages and preach the good news of Jesus the Christ. His teachings and way of life allow us to find peace and harmony and help others in need. By doing as he taught us, we can become better people and show God's love through us mortal beings.

In the Incarnation, normally defined, the divine nature of the Son was joined but not mixed with human nature[2] in one divine Person, Jesus Christ, who was both "truly God and truly man". The Incarnation is commemorated and celebrated each year at the Feast of the Incarnation, which is better known as the Annunciation.

In recent past, another doctrine known as "Oneness" has gained credit amongst Pentecostal groups (see below), but has been rejected by other Christians.