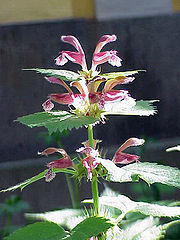 A single 'sunflower' is a composite of many tiny flowers, a pseudanthium

An inflorescence is a flowering stem. The term is most used for a group or cluster of flowers arranged on a stem. It is a very common arrangement, which keeps the flowers together. An inflorescence is the reproductive portion of a plant; each plant bears its flowers in a specific pattern.

Sometimes it is just a close bunch of flowers (e.g. Antirrhinum) on a spike. Sometimes the inflorescence is so tight it looks like one single flower. What you see as a single daisy is actually made of several hundred tiny flowers packed together. This kind of inflorescence is called a pseudanthium ("false flower").

The advantages of the inflorescence mode is all about reproduction compared to a single primitive flower of the Magnolia type.[1]

Numbers
There may be dozens or even hundreds of flowers in an inflorescence, with many seeds or fruits for each flowering.
Pollination
Increased pollination is an important bonus. Massing flowers together makes them move visible to pollinating insects and birds.
Seed or fruit dispersal
Dispersal by wind or animals is improved by having the flowers at the top end of a stem.