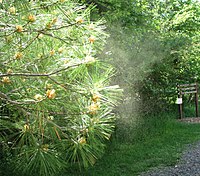 Pollen flowing from a pine tree. Conifers are wind-pollinated. 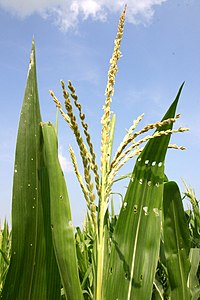 Corn (maize) male flower (corn tassel). The stamens of the flower produce a light, fluffy pollen which is borne on the wind to the female flowers (silks) of other corn plants. 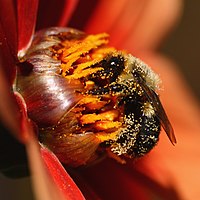 Pollination is part of sexual reproduction in plants. It describes how the pollen grains get to the female parts of a plant. Pollen grains, which contain the male gametes, need to get to where the female gamete(s) are.

What happens is basically the same as sexual reproduction in animals. Each pollen grain is haploid: it has half of the DNA (genetic information) that is needed to make a new plant. During fertilization this combines with the DNA that is in the egg of the female part and a zygote is formed. In seed plants a seed is started.

In flowering plants, pollen has to get from one flower to another.[1] There are two main ways that this can happen: by non-living things like wind or water, or by living things such as insects or birds.

Maize (called corn in some parts of the world) is pollinated by wind. The male anthers let go of their pollen and it blows over to a nearby female flower on another corn plant. Most of the flowers are either male or female on a corn plant (monoecious), rather than both sexes in one flower (hermaphrodite).

Maize flowers have evolved (changed over time) to use wind for pollination. They do not need pretty petals. The pollen is light so it can blow around, and the ends of the female parts (stigma) are fluffy to catch all the tiny pollen grains.

With tomato plants, bees move the pollen from the male parts of one flower (anthers), to the female parts of another flower (stigma). The bee moves between flowers as it collects the nectar that the flowers make. The bees take the nectar and some pollen back to their hive, and the tomato plants get to reproduce (make new tomato plants).

Because the tomato flowers have evolved to attract bees, they have spread-out petals and are white to human eyes (bees, like most insects, can see into the ultraviolet range as well as our visual range of wavelengths). The pollen is often stuck together in clumps called pollinia, which in turn get stuck to the bee. Bees are extremely hairy, and carry tiny electric charges which attract the pollen onto their bodies. Honey bees have special pollen baskets, usually on their rear legs; they groom the pollen off their bodies into these pockets.

Much of the pollen gets taken back to the nest or hive, where it is used as a source of protein, most needed by the larvae. Some gets rubbed off on the next flower, where the female stigma is sticky. A pollen tube grows down to permit the male gamete to fertilize an egg and make a seed.

90% of flowering plants are pollinated by animals, and only 10% use abiotic (non-living) pollination. Of these abiotic pollinations, 98% is done by wind and just 2% by water.[2]

What happens after pollination

The process begins when a pollen grain sticks to the stigma of the pistil (female reproductive structure). Then it germinates, and grows a long pollen tube. While this pollen tube is growing, a haploid cell travels down the tube behind the tube nucleus. This cell divides by mitosis into two haploid sperm cells. 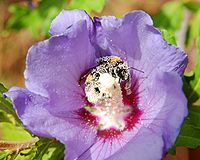 Bumblebee smothered with pollen in a hibiscus flower. photo by Luc Viatour

There is evidence that some gymnosperms were insect-pollinated in the Triassic period, but pollination by animals is not the main method in this group. Most are wind-pollinated. Some gymnosperms and their insect pollinators are co-evolved for pollination. The best-known examples are members of the order Cycadales and their associated species of beetle.

Pollination syndrome is the set of adaptive traits which help flowers to get pollinated.

Wind pollinated flowers are usually small and inconspicuous (not showy). They do not have a scent or produce nectar. The anthers may produce a large number of pollen grains, while the stamens are generally long and stick up out of the flower. Their stigmas may be large and feathery to catch the pollen grains. Insects may visit them to collect pollen; there are some examples of flowers which are both wind and insect pollinated.

Beetle-pollinated flowers are usually large, greenish or off-white in color and heavily scented. Scents may be spicy, fruity, or similar to decaying organic material. Most beetle-pollinated flowers are flattened or dish shaped, with pollen easy to get at. They may have traps to keep the beetle longer. The plant's ovaries are usually well protected from the biting mouthparts of the beetles.[4] Beetles are important pollinators in some parts of the world, such as dry areas of southern Africa and southern California,[5] and the montane grasslands of KwaZulu-Natal in South Africa.[6]

Some flies feed on nectar and pollen as adults (particularly bee flies and hoverflies). The flowers they visit often have a strong scent, and tend to be purple, violet, blue, and white.[7]

On the other hand, male fruit flies are attracted to some wild orchids which do not produce nectar. Instead, they produce a precursor of the fly's sex pheromone.[8][9] Flies which normally visit dead animals or dung are attracted to flowers that mimic these smelly items. They get no reward and would quickly leave, but the plant may have traps to slow them down. These plants have a strong, unpleasant odor, and are brown or orange in colour.[10]

Bee-pollinated flowers tend to be yellow or blue, often with ultraviolet nectar guides and scent. Nectar and/or pollen are offered as rewards in varying amounts. The sugar in the nectar tends to be mostly sucrose. There are different types of bees which differ in size, tongue length and behaviour (some solitary, some colonial).[12] Some plants can only be pollinated by bees because their anthers release pollen internally, and it must be shaken out by buzzing ("sonication"). Bumblebees are the only animals that do this.

Bee pollination from mobile beehives is of great economic value for orchards such as apple or almond.

Wasps are also responsible for the pollination of several plants species, being important pollen vectors and, in some cases, even more efficient pollinators than bees.[13]

Butterfly-pollinated flowers tend to be large and showy, pink or lavender in colour, often have a landing area, and are usually scented. Since butterflies do not digest pollen (with one exception), more nectar is offered than pollen. The flowers have simple nectar guides with the nectaries usually hidden in narrow tubes or spurs, reached by the long tongue of the butterflies.

Among the more important moth pollinators are the hawk moths (Sphingidae). Their behaviour is similar to hummingbirds: they hover in front of flowers with rapid wingbeats. Most are nocturnal or twilight feeders. So moth-pollinated flowers tend to be white, night-opening, large and showy with tubular corollas and a strong, sweet scent produced in the evening, night or early morning. A lot of nectar is produced to fuel the high metabolic rates needed to power their flight.

Other moths fly slowly and settle on the flower. They do not need as much nectar as the fast-flying hawk moths, and the flowers tend to be small (though they may be aggregated in heads).[14]

Hummingbirds are the most familiar nectar-feeding birds for North Americans, there are analogous species in other parts of the world.[15][15] Flowers attractive to hummingbirds, which hover in front of the flower, tend to be large red or orange tubes with a lot of dilute nectar produced during the day. Since birds do not have a strong response to scent, they tend to be odourless. Perching birds need a substantial landing platform, so sunbirds, honeyeaters, and the like are less associated with tubular flowers.

Bat-pollinated flowers tend to be large and showy, white or light coloured, open at night and have strong odours. They are often large and bell-shaped. Bats drink the nectar, and these plants typically offer nectar for long periods. Sight, smell, and echo-location are used to initially find the flowers, and excellent spatial memory is used to visit them repeatedly.[16] In fact, bats can identify nectar-producing flowers using echolocation.[16][17] Bat-pollinated plants have bigger pollen than their relatives.[18] 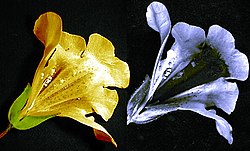 Honey guides, nectar guides or floral guides are markings on flowers which tell insects where to go for nectar (many insects can see in the ultraviolet range). Most of these guides are invisible to humans unless seen in ultraviolet light. The benefit to the plant is that the guides increase the supply of pollinators at a relatively low cost.

Sprengel remembered: a small plaque designed after the frontispiece of his book is in the Berlin Botanical Gardens

A full understanding of pollination is quite recent.

In 1672 Nehemiah Grew had some idea that pollen was the means of fertilisation in higher plants.[19] Using a microscope, he was the first to describe pollen in detail. This led to the discovery that all pollen grains in a species were alike.[20] The study of pollen grains is called palynology. It is much used in micropaleontology. Sex in plants was discovered in 1694, when Rudolf Camerarius put his discovery into a letter.[21]

In 1793 Christian Sprengel (1750–1816) published a work on the pollination of flowers by insects which made all the main points.[22] Unfortunately, "his work was so far outside the standard thinking and interests of the period that it was almost completely ignored".[23][24]

Two lines of work solved the main issues. One was done by studies of how the pollen cells worked to fertilise the ovum,[25] and the other was to recognise the coevolution of the animal pollinators and the flowering plants.[26][27] Both these lines of work became essentially 'modern' in the middle of the nineteenth century.[28][29][30]