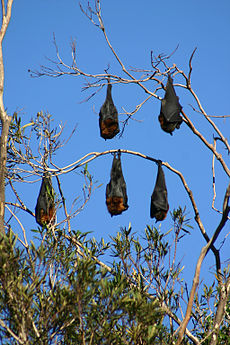 A colony of Megabats

Bats are mammals in the order Chiroptera. Bats are nocturnal – they are active during the night, dusk, or dawn and they sleep during the day.

Most use echolocation to catch prey and to find their way about. As nighttime animals, bats avoid direct competition with birds, few of which are nocturnal.

Bats usually live in caves or trees. In North America and in Europe they sometimes live in people's houses or barns. They are protected animals in the U.K.

Bats are a successful group. They are the second largest order of mammals: there are more than 1,200 species of bats. This means that 20% of all living mammal species – one in five – are bats.[1][2]

About 70% of bats are insectivores, which is the basal form of life for this group. The common pipistrelle is a successful example. Most of the rest are fruit-eaters (fruit bats). A few species suck blood, and a few large ones are carnivorous.

Bats live everywhere except the Arctic, Antarctic and a few oceanic islands. They usually roost in caves, old buildings, or trees.

Traditionally, bats are divided into two groups. Microbats mostly use echo-location and catch insects, but just a few eat fish or drink blood. Megabats do not echolocate, but instead eat fruit or nectar.

Most of the bats are well-known for their uncanny capability to avoid flying into dark places, and most of the bats use sound to navigate during the night (Tuttle, 3)[3]. Bachen et.al maintains that bats can fly and locate their food by listening to the outcoming echoes and sending out high-frequency squeaks even in total darkness.[4]

The phylogenetic relationships of the different groups of bats have been the subject of much debate. The traditional subdivision between Megachiroptera and Microchiroptera reflects the view that these groups of bats have evolved independently of each other for a long time, from a common ancestor which was already capable of flight.

The hypothesis was that flight only evolved once in mammals. Most molecular biological evidence supports the view that bats form a single or monophyletic group.[2] 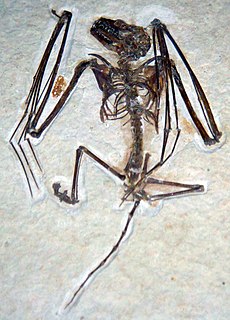 There are few fossilized remains of bats, as bats are terrestrial and light-boned.[5] An Eocene bat, Onychonycteris, was found in the 52-million-year-old Green River Formation in Wyoming, United States, in 2003.[2][6] It could fly, but the well-preserved skeleton showed the cochlea of the inner ear could not achieve the great hearing ability of modern bats. This was evidence that flight in bats developed before echolocation. The team said it lacked ear and throat features not only of echolocating bats today, but also in other known fossil species. Fossil remains of other Eocene bats, Icaronycteris, Archaeonycteris, Palaeochiropteryx, Hassianycteris and Australonycteris all show a similar mixture of basal and derived traits,[7] as expected by mosaic evolution.

All Eocene bats had long tails. This feature is also found in early flying insects in the Carboniferous, in early pterosaurs and in Archaeopteryx and other dinobirds. The tail helped to keep their flight stable, which means it kept on course, and did not dart about much. To dart about quickly requires special advanced brains and reflexes, which later bats, birds and pterosaurs had, but early ones did not. It requires more brains to control unstable flight than it does for stable flight. That early bats had long tails was predicted by John Maynard Smith before any fossil early bats were found.[8][9]

Onychonycteris had longer hind legs and shorter forearms, similar to climbing mammals that hang under branches such as sloths and gibbons. This palm-sized bat had broad, short wings, suggesting it could not fly as fast or as far as later bat species. Instead of flapping its wings continuously while flying, Onychonycteris likely alternated between flaps and glides while in the air. Such physical characteristics suggest this bat did not fly as much as modern bats do, rather flying from tree to tree and spending most of its waking day climbing or hanging on the branches of trees.[2]

An interesting thing about bats is that even though they can see with their eyes, they also use their ears to help them 'see' in the dark. Because of this, they can fly into very dark places where no eye could see. This way of sensing is called echolocation. Echolocation means they use echoes to find where things are.

Echolocation is like sonar, which submarines and ships use to find things underwater. This is how it works: when a bat flies, it makes lots of sounds. We cannot hear these sounds (they are too high-pitched), but bats can hear them. Biologists have instruments to record them, and then play them back at a lower frequency so humans can hear them.

When a bat makes its noises, the sound waves move away from the bat. If they hit something, they bounce back to the bat (this bounce is called an echo.) If nothing bounces back, the bat knows there is nothing in front. They use this echolocation to catch their food, like butterflies or dragonflies. When a bat begins its nightly exploration, it usually sends out about 10 calls per second. From the echo they know what is in front. When they get an echo from something good to eat, the calls increase up to 200 calls per second. This increase of sounds is called a feeding buzz. The bat makes a feeding buzz to sense all the quick moves of the insect it is trying to catch.

Hearing and understanding the echoes that go back to the bat takes special structures in the bat's brain. Because of this, many scientists, doctors, and even the U.S. army study bats carefully. The U.S. army spends hundreds of thousands of dollars every year to study echolocation in bats.

Bats also have reasonably good eyesight, and can see their prey and where they are flying if it's not too dark. There are lots of stories about bats flying right into people, but this is not true. They can see in the light very well, and in the dark, they can see much better than us. So the expression "blind as a bat" is not very scientific. [10]

Some bats use echolocation to communicate with each other to find food in groups. Scientists from the Max Planck Institute of Animal Behavior studied the bat Molossus molossus, which hunts insects in groups. They found the bats could understand echolocation noises made by other bats and even tell which other bat in their group had made the sound, like people recognizing each other's voices.[11]

Bats fly with their hands. In fact, the name of the order of bats, Chiropetera, means 'hand-wings' in Greek.[12]

Bat and bird wings are different. Birds do not have long finger-like bones in their wings like bats. Birds can not move each of their fingers, but bats can. Because of this, bats can change their direction while flying or fly in any pattern they want: this makes it easier to catch their food. A bat flies as if they are "swimming" through the air – pushing both wings down and backward.

A bird's wing has lots of feathers, while a bat's wing is mostly a stretchy, thin skin called a patagium. This thin membrane of skin stretches between each finger bone, connects to the bat's ankle, and connects to the bat's tail (if it has one). A bat folds its wings next to its body when not flying.

Bats have one claw (sometimes called a bat thumb) that sticks out of the top of the wing. They use their "thumb" to climb and crawl. Interestingly, bats also use their thumbs to clean their ears.

Bats' wings have a lot of maneuverability (they can change direction well) – more than a bird, in fact – but they do not have a lot of lift. Because of this, bats usually have to climb up onto a tree or jump up into the air for the boost before they start flapping their wings.

Even though bats are very small, they live a long time. Some bats can live forty years. Scientists think this is because their immune systems are very good at fighting viruses. Bats fight viruses without having inflammation in their bodies. Doctors think inflammation causes harm to the body, so they think this could be why bats live a long time.[13]

Because bats rest in large groups with many other bats, they can pass diseases to each other easily. This means that over thousands of generations, viruses and other germs have placed selective pressure on bats, killing bats with weak immune systems and leaving bats with good immune systems to survive and have young.[13]

Many viruses that start in bats later change and become dangerous diseases in humans, for example Ebola and SARS-CoV-2.[13][14]

Megabats eat fruit, nectar or pollen. They pollinate flowers and sometimes spread their seeds. Many tropical plants completely depend on bats.

Most microbats (7 out of 10 bat species) are insectivorous, that is, they eat insects. Some microbats eat small vertebrate animals (small mammals or fish), blood, or even other bats. There are only a few species of vampire bats, which eat blood from cattle.

Most bats rest, sleep and hibernate in an upside-down position. They hang on to branches or rocks with their feet. To do this they have a locking mechanism on the tendons in their feet which stops them from slipping.[15] The energy they spend hanging on is greatly reduced. The most obvious gain is that they can sleep without falling off. Once the tendons are locked, the muscles in their legs and feet can relax. Even dead bats stay hanging.[16]

In the United Kingdom all bats are protected by law, and even disturbing a bat or its roost can be punished with a heavy fine.

Austin, Texas is the summer home to North America's largest urban bat colony (under the Congress Avenue bridge), an estimated 1,500,000 Mexican free-tailed bats, who eat an estimated 10 to 30 tons of insects each night, and attract 100,000 tourists each year.

In Sarawak, Malaysia bats are protected species, but the large naked bat and greater nectar bat are eaten by the local communities.

Bats in folklore and fiction

In the West, bats are associated with vampires, who are said to be able to change into bats. Bats are also a symbol of ghosts, death and disease. However bats are said to be lucky in some European countries, such as Poland.

The bat is used in fiction by both villains like Dracula and heroes like Batman. Kenneth Oppel wrote a series of novels, beginning with Silverwing, which feature bats as good characters.