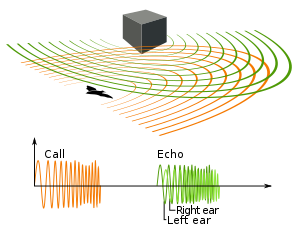 The ultrasound signals emitted by a bat, and the echo from a nearby object

Echolocation is a way that some animals use to determine the location of things. They emit sound waves and listen for the echo. They use the delay to determine the distance. It is a kind of biological sonar.